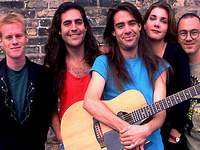 
We're talkin' about a thick necked man in the city
Build a pub a blood and sweat
Swears by God he'll stand by justice
He ain't stood by justice yet
He get's them drunk and gets their money
They cash their welfare checks for stout
Now he throws them into the street
He's sucked you in, he'll spit you out

This money-minded s.o.b.
Will not a penny lend
And all I can do is pray to god
He'll suffer in the end

This bloody-minded s.o.b.
Has not w ound to mend
And all I can do is pray to god
He'll suffer in the end

Now we're talkin' 'bout a thick-necked man in a fist fight
Losing lots of blood
It's not his night, his boss is uptight
His face and name are covered in mud
He watches t.v., all star wrestling
Slams a six of ale
Hits his wife, wrecks the car
And spends the long dark night in jail
Well the preacher man, he comes and asks him
Does he know the mess he's in?
He says he'll turn to jesus if he'll
Bail him out and buy him gin