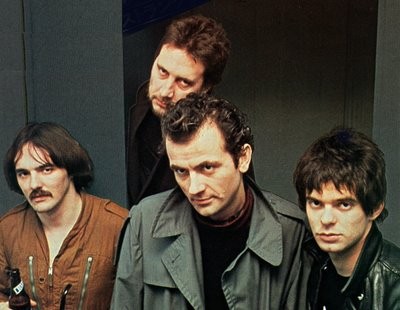 A fine day for the classroom and the pupils are here
Julie's got a headache but the others don't care
Sarah's got to stay behind and help with the drill
Teacher's got his eye on her
Moves in for the kill.
Nobody can see or hear the things that they do
All the books stay closed, there must be something they do
Only teacher knows about the subjects they span - span
Education's secondary, being a school mam

Oooooeeee!
Teachers doing fine as far as I can see

Noises heard the principal investigates
She turns on all the cameras but it's too late
Catches both their pants down in a passion war
Hasn't seen it happen since the day she was born
Reaching down for glasses that just can't be found
By the time she finds them, why their down on the ground
Tossing and a turning they've got feverish hands
Lead can be so fluid when you're being a school mam

Oooooeeee!
Teachers doing fine as far as I can see

Sucking on her fingernails she can't believe what she's seeing
She's seeing something close to what appears on the screen
Locks her door, with trembling hands and her hearts beating very fast
She pretends she's down there on the floor in the class
Gives herself to teacher although he doesn't know
Works herself into a frenzied state and it shows
Sarah's almost at the top but try as she can
She can't reach her helter skelter
Down with the school man

Oooooeeee!
Now she's at the top and teacher sets her free

Oooooeeee!
Teacher never will discover who could see