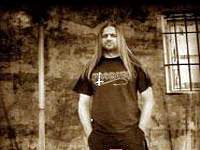 
"We have chosen this topic because of its actuality.
Right extremists are on the rise again all over the world.
50 years after the tragedy of Lidice, a czech village completely burned down by the
german Wehrmacht, there is still a lot of people who don't seem to understand.
We want to memorize all victims of fascist regimes
(communism in it's living form was also fascism !), especially the people of Lidice.
Millions of dead accuse rightist policy. All of you who still don't understand – FUCK YOU!

Dealing with pain each day, surrender to their suffering
A brutal sttement of power against a mankind insane the pain