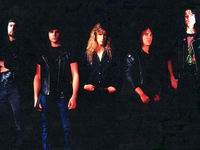 End Of The Age

I hear it in a minstrel wind, it's crying out the tune

Of a prophet's only hope to tell the world

He wrote down it on parchment, but alas no one believes

Of the vision only one man could conceive

He knows it's true

And blind their eyes to the truth once again

But still you do not know that summer's near?

They need a God that they can touch and see

You'll find peace amongst the tragedy

Woe to those who hear not

Woe to souls who've been bought

Oh, it's written on the page

Woe to those who fear not

Woe to souls who've been bought

You don't see the ending of the age

You wandered throught the wilderness for forty years or more

To lead you to the promised land, promised years before

Have you still not learned a thing, the wickedness of man

And oh, hands up to the sky

And oh, the angel passes by

One bowl for the wicked

One bowl for the sea

One bowl for the rivers

The sun will then be darkened

The moon will give no light

The earthquakes will shake up the earth

The terror in the night

And oh, hands up to the sky

And oh, watch the beast begin to rise

Remember what I've told you

And tell the human race just what it means
« ПредыдушаяСледующая »