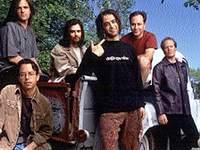 She Don't Want Nobody Near


She don't want nobody near
But you can't get away from that
They appear and disappear
And they all get a string attached
Pretty soon they got you hanging on a line
Pretty soon they're singing one by one the same old rhyme
They say, "I'm alright, I just can't get home tonight."

She don't want nobody home
Cause it's a little too crowded then
But she don't wanna be alone
So they just keep pouring in
Pretty soon they got her headed for the door
She comes home to find that they're not hanging 'round no more
She says "I'm alright, you just can't get home tonight."
Don't you wonder what she looks like in the light?
She says "I'm alright, I just can't get home tonight."

Pretty whitewashed lies
Endless alibis
And the reasons that need cleaning every night
Half a world away
You can't wash away the stain of the deceiving
And the things that you cannot believe, and well...